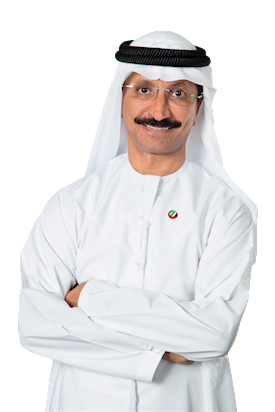 Sultan Ahmed Bin Sulayem is one of Dubai's leading businessmen. He is the Group Chairman and Chief Executive Officer of DP World and the Chairman of the Ports, Customs & Free Zone Corporation.

Mr. Bin Sulayem’s expertise and visionary leadership spearheaded the rapid expansion of Dubai’s infrastructure, including ports and free zones, contributing significantly to the stellar growth trajectory of the United Arab Emirates. He was also a leader in developing the infrastructure supporting Dubai’s successful tourism industry, among various other sectors.

Highlights of his three-decade business career include:

• Leading marine terminal operator DP World’s expansion internationally, including the purchase of the P&O group for US$6.8 billion in March 2006, which propelled it to one of the largest global port operators and trade enablers in the world with 78 marine and inland terminals in six continents

• Establishing and leading Nakheel, a real estate and tourism property development firm that has created many iconic Dubai projects including The Palm, the world’s largest man-made islands

• Establishing and leading Istithmar World, a major investment house focusing on private equity with a portfolio of investments in diverse sectors across North America, Europe, Asia and the Middle East including retail, financial services, industry, tourism and hospitality, and healthcare

•Pioneering the Dubai Multi Commodities Centre (DMCC), a market for gold and precious metals, diamonds and coloured stones, energy and other commodities.

Mr. Bin Sulayem has a BSc in Economics from Temple University in the USA. He is a Board Member of the Dubai Executive Council, the UAE Federal Tax Authority. He is also Chairman of Virgin Hyperloop One.

In 2022, he was named as the MENA region’s first HeForShe Champion by UN Women.