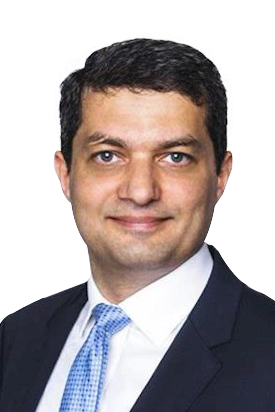 Rizwan Soomar, an accomplished leader with a career spanning over two decades in the maritime and logistics sector, spearheads DP World’s operations in the Indian Subcontinent region. He joined DP World in November 2017 and is responsible for driving commercial and operations strategy for the region.

Prior to joining DP World, Rizwan was associated with AP Moller Maersk Group where he held senior leadership roles including Managing Director of the Group’s logistics arm in Egypt as well as Managing Director for Maersk Line - India & Sri Lanka. After his successful stint in these regions, Rizwan took over the role of Vice President and Global COO of Svitzer, Denmark, which operates a fleet of more than 500 vessels across 130 locations.

In 2010 he was featured by a prominent Indian business magazine (Business Today) as one of the 25 top successful executives in India under the age 40. He has also been shortlisted amongst the top 100 leaders, equipped to handle a high revenue by the AP Moller-Maersk Group globally.

He spent around five years in Singapore as the Head of APM Terminals Seaports and Inland logistics investments in South Asia and Head for Commercial function of the Asia – Pacific region. During this tenure, Rizwan also served as the Chairman on the board of Gateway Terminals Mumbai and a Non Executive & Non Independent Director on the boards of Pelabuhan Tanjung Pelepas Sdn Bhd, South Asia Gateway Terminals Sri Lanka and Gujarat Pipavav Port Limited.

Rizwan has an MBA degree from the Chicago Booth School of Business at the University of Chicago in the USA and a Diploma from the Institute of Chartered Shipbrokers (ICS) in London. He has also participated in Executive Management programs at INSEAD, Fontainebleau and IMD, Lausanne.