DP World app for truck drivers now in the store

DP World app for truck drivers now in the store

Terminal operator DP World Antwerp developed a new mobile app for truck drivers to facilitate their work at the terminal. The app with the name "Route 1700" is now available in the app stores of Apple and Android. The new application will ensure better communication and a smoother flow at the terminal, and in the long run will make all physical administration unnecessary for truckers. 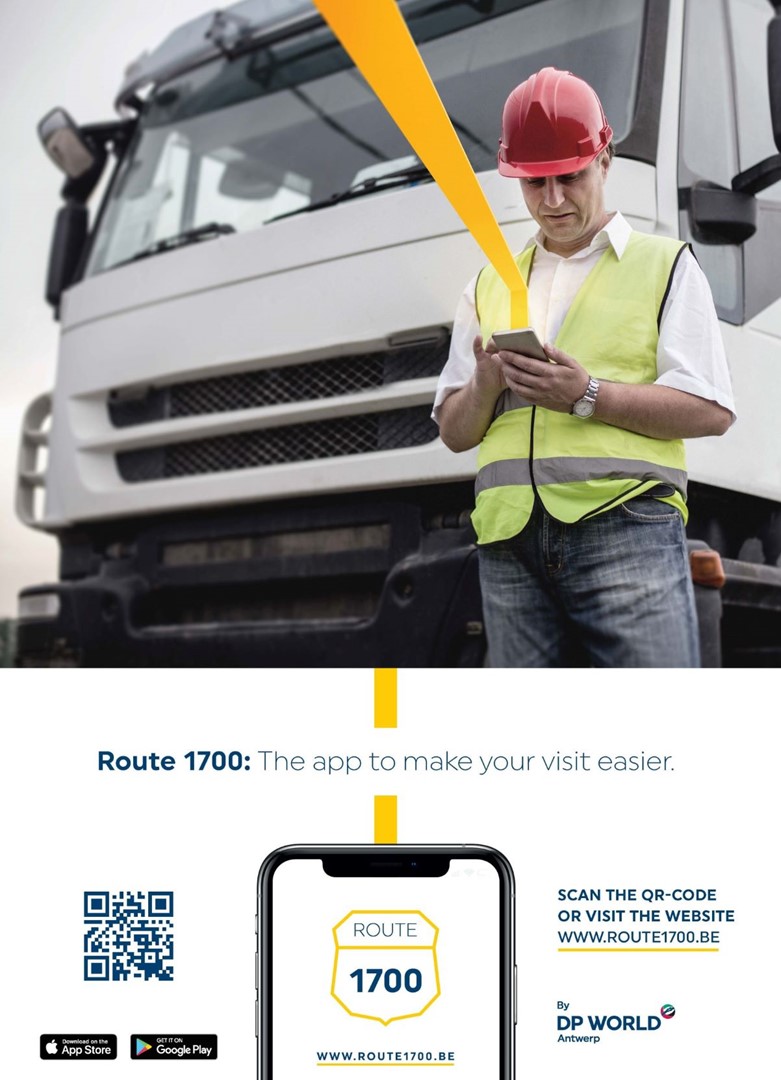 In May DP World announced the development of a new app for truckers. The entire truck flow at the terminal is digitized here, which makes for a smoother flow and easier handling by the trucker. The app has been extensively tested by truckers in recent months and further refined based on their input. The first reactions were positive. “At CM Logistik, we are always looking for new, more efficient options for controlling our trucks. With an app like this, it will be a lot easier for our drivers and my department to improve work at DP World! ”, Says Richard Boerma, Westhaven Transport Planning Department. The name of the new app, "Route 1700" is inspired by the quay number 1700 of the terminal and is an allusion to the historic American motorway. The app was developed in conjunction with full-service digital agency The Reference.

Every day 2000 trucks come to load or unload their container at quay 1700, which requires a lot of administration. The truckers are currently arranging this via the self-service desks on site and are notified by SMS. That system remains, but the app offers a number of additional benefits. The driver can see on his smartphone what information he needs, without having to get out of his truck and having to go to a checkpoint. He is guided step by step through the flow with route guidance. In addition, drivers will receive messages via the app about, for example, disruptions or peak moments at the terminal. In addition, they receive personal information about waiting times and there is a possibility to provide feedback. Finally, there is a Frequently Asked Questions in the app.

“By communicating openly about waiting times and circumstances, we want to better inform drivers. Truck visits can be optimally planned by sending the right information to the right people at the right time, "says Geert Maes, IT Project Manager at DP World. "By going digital, we want the entire logistics to run as smoothly as possible."

"With Route 1700, DP World continues to use its digital platform to offer additional innovative services in a sustainable manner, in consultation with the community," said Johan Van Wyngene, CIIO DP World Antwerp. John De Wever, spokesperson for The Reference, supports him. “This project shows that digital innovation pays. The app improves both the business processes and the customer experience of the end users. ”

The product launched today is a basic version. "In the coming months we will optimize a number of things, such as developing different versions for new and experienced drivers at our terminal," says Maes. The flow at Empty Depot Services will also be integrated over time, and it will be possible to complete the safety induction in advance via the app. Moreover, new applications will be developed based on the input from the truckers. "We have developed this app especially for the truckers, so all feedback is welcome!"