The construction of the new building for dockers and office workers at the DP World Antwerp container terminal reached a new milestone this weekend. Less than a year after the start of the works, the pedestrian bridge that connects the new building with the car park was installed on Saturday 26 September. This bridge is located over a railway and gives staff and visitors access to the building from the parking lot located below. Two 700 and 750 ton cranes lifted the bridge over the railway this weekend. 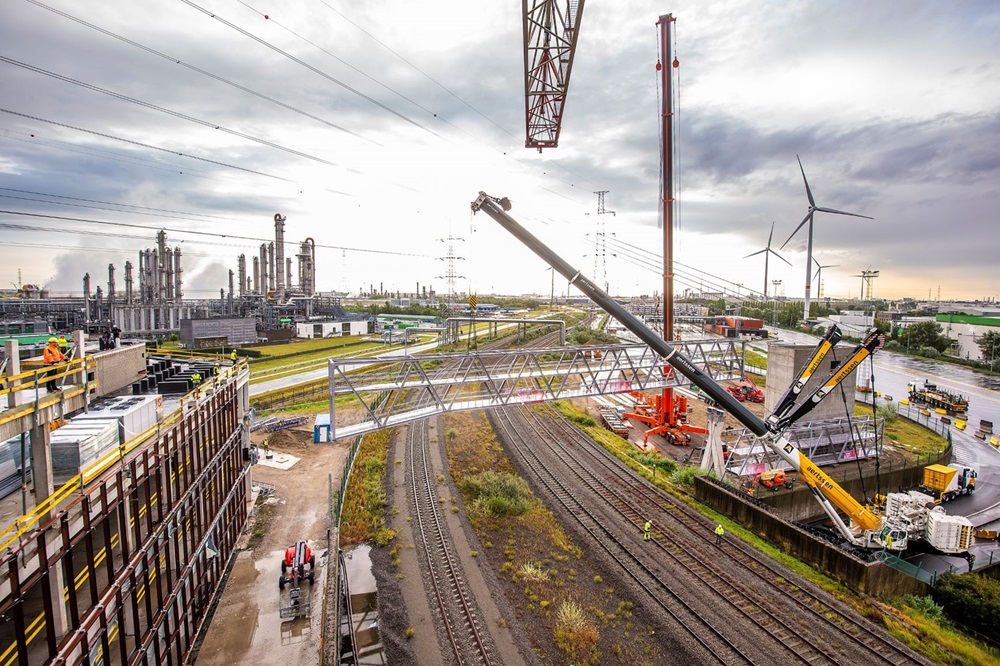 Connection between building and parking

The new building, which will be ready by the summer of 2021, offers facilities to the more than 500 dock workers and some of the employees of DP World Antwerp and will be the operational hub of the Antwerp Gateway terminal. The building will be constructed on top of a lorry road and right next to a railway. In order to be able to reach the lower car park on the other side of the fence, a pedestrian bridge is installed to provide access to the first and second floors of the building. The bridge can be accessed from the car park via a staircase.

Unique twin lift over the railway

The new pedestrian bridge is 65 meters long, consists of a two-storey steel construction supplied by C-Metal and connects the first and second floors of the new building with the staircase on the car park on the other side of the railway. Two 700 and 750 ton cranes from Aertssen lifted the construction over the railway. The first crane was set up on the new car park, the other crane on the other side of the fence, on the DP World site. The cranes hoisted the bridge over the railway in two parts via a twin lift. The bridge rests on concrete structures on the first floor of the building and the staircase.

Remarkable location in the middle of port infrastructure

The new operational building, designed by Areal Architecten and built by contractor Van Roey, is already taking shape. The work started on 20 November 2019. The concrete construction has already been completed, the facade glazing is currently being installed. The first staff will be able to move in by the summer of 2021. Due to its unique location on top of a roadway, also taking into account the existing rail, water, gas and high voltage infrastructure, it is a special piece of architecture. The ground floor of the new building will include a canteen and changing rooms for dockers. The three floors above will include offices and meeting rooms for employees and management.

The building is part of DP World's EUR 197 million investment plan to create 900,000 TEU of additional container capacity at its existing terminal. This is done by redesigning and further automating the terminal. The old building will make way for extra containers.