Max, from Henley-on-Thames in the United Kingdom, is set for his Formula 1 Esports debut, while Ian is making his third race appearance for the team after entering the Virtual Bahrain Grand Prix and the Virtual Chinese Grand Prix over the course of the last two months.

Max is preparing for his second season in the FIA Formula 3 Championship with Hitech Grand Prix after ending last year’s campaign tenth, picking up two podium places on the way. The Circuit de Barcelona-Catalunya will bring back happy memories for the 20-year-old after he clinched the Formula Renault Eurocup title at the Spanish circuit in 2018. Max also enjoyed his first Formula 1 test in Barcelona last year, driving the Renault R.S.17 around the 4.655km circuit as part of his development on the young driver programme.

DP World Ambassador Ian, of Hitchin, Hertfordshire, is looking to build on his Esports experience to date. The five-time Ryder Cup winner races on his simulator set-up at his home in Florida and targets breaking into the top 10 in his third-ever Formula 1 Esports entry.

Max and Ian will draw upon Renault Team Vitality’s Esports coaching expertise in the build up to the race to ensure they are well prepared for the 33-lap race on Sunday.

For the Exhibition Race (17:00 BST) prior to the Virtual Grand Prix (18:00 BST), Nicolas Longuet and Fabrizio Donoso will again represent the team.

Max Fewtrell: “I’m super excited to be competing in the Virtual Spanish Grand Prix for Renault DP World F1 Team. It’s going to be something new for me

as I’ve recently received a simulator and I’ve been trying to practice and get better. Barcelona is a memorable track for me after winning the Formula Renault Eurocup there in 2018 and having my first Formula 1 test at the circuit last year in the Renault R.S.17. Having Ian Poulter as my team-mate is really cool; I’m a big fan of golf and I like watching him do what he does. Maybe we can exchange ‘driving’ tips for each other!”

Ian Poulter: “It’s a pleasure to join Renault DP World F1 Team again for a Formula 1 Virtual Grand Prix. It’s going to be a good challenge, especially learning a new circuit on my simulator! It looks like a great track so it should be fun to learn along the way. As always, the race is going to be competitive against some current Formula 1 drivers and other guests, but I’ll do my best to have a good result.” 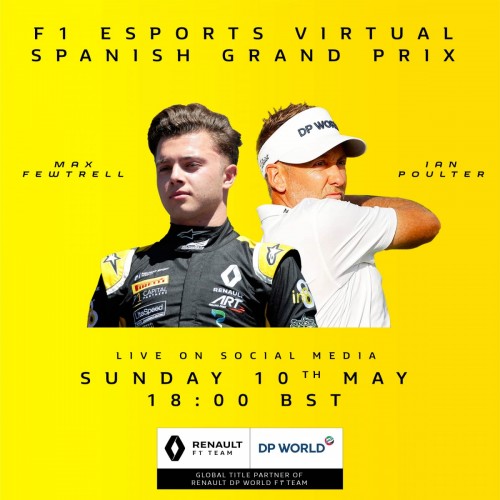 About DP World and Renault Formula 1

DP World is the Global Logistics Partner and Title Partner of the Renault Formula 1 Team, which will become the Renault DP World F1 Team from the 2020 season. One of our strategic objectives has been to develop innovative logistics solutions for the automotive sector. Under the partnership, teams from DP World, Renault Sport Racing and Groupe Renault will leverage the F1 global marketing platform and collaboratively explore opportunities to increase the efficiency of their supply chain.