Rail is the answer to supply chain resilience in Britain

Rail is the answer to supply chain resilience in Britain

Last week, The Times reported that supply chain bottlenecks are now impacting Britain’s economic growth. While there are several contributing factors across the globe related to the pandemic, when we look closer to home the lorry driver shortage is one of the biggest local factors causing delays and congestion at shipping terminals and warehouses across Britain. With a storied history of freight rail in our country – the world’s first goods rail terminal opened in England in 1830 – this tried-and-tested mode of transport is one of the UK’s greatest assets to keep Britain trading and our economy on the move.

According to the Road Haulage Association, there is a current shortage of more than 100,000 drivers across the UK, around 17% fewer than before the pandemic. Logistics industry analysts are speculating that such a shortage will significantly impact deliveries in time for Christmas.

Maximising the use of rail for trunk haul movements to and from ports enables the truck fleet to concentrate on valuable final mile delivery while reducing the total truck miles on Britain’s road network.

For example, a single standard-length train can take the same load as up to 76 trucks. With new 775 metre trains, which can be loaded at both DP World’s  London Gateway and Southampton terminals, the load of up to 90 lorries can be carried a single train.

According toDepartment for Transport, each tonne of freight transported by rail reduces carbon emissions by 76% compared to road.

And while the benefits of train freight transport are clear, trucks and trains each have their own advantages and limitations. In any smart logistics network, there needs to be a combination of both to achieve an optimal balance of time, cost, efficiency and environmental impact.

In the middle of the supply chain, port-centric logistics terminals are helping to boost rail’s position in the transport modality mix – taking pressure of trucking and increasing resilience through diversification. It’s a win-win for businesses, consumers, and the environment.

We know from our UK operations at London Gateway and Southampton that our rail connection takes 300,000 trucks off UK roads each year – reducing congestion on British motorways and cutting down harmful pollutants and carbon emissions.

As more and more businesses move their warehouses to terminals in pursuit of the benefits of port-centric logistics, the mid-chain is ripe for increased freight rail movements.

Here at DP World we are always looking to enable trade and have been working closely with container rail partners Freightliner, DB Cargo UK, GB Railfreight and Maritime Intermodal to explore how to encourage the much needed modal shift to rail – needed to serve the UK economy in the 21st  Century.

In fact, out of Southampton, 30% of our shipments are railed – the highest in the UK – with London Gateway aiming to achieve similar levels.

At London Gateway we have over 9.25m sq. ft. of potential warehousing space at our logistics park directly connected to both national and international rail lines and serviced by Freightliner and DB Cargo UK.

It means that warehouses at London Gateway’s Logistics Park can store goods, and then move them to their final destination using onsite intermodal links – cutting out a truck journey to and from the warehouse to the port.

For example, we know that British grocery stores rely on rail to move produce up and down the country – helping to take pressure off trucking and our road network whilst also lowering the carbon footprint of our food supply chain. 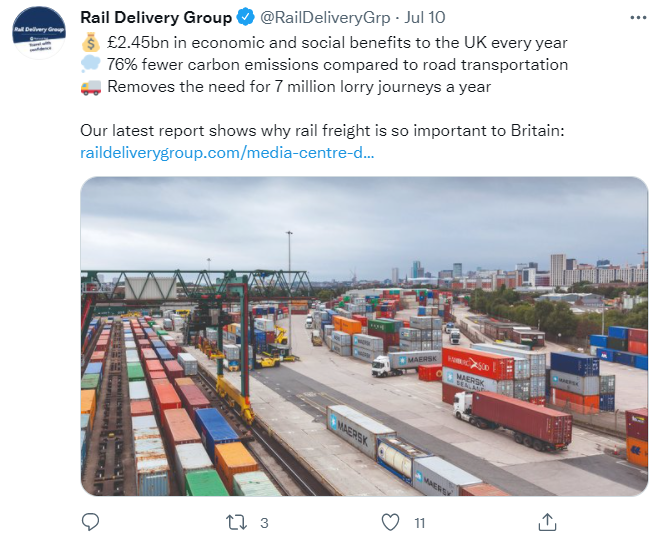 Beyond the direct benefits to the supply chain, according to Deloitte, a single rail freight path can generate up to £1.5 million each year. This means that more freight train space on the rail network not only keeps trade moving, but there are economic opportunities for local communities too.

With these clear benefits, Rail Delivery Group aims for rail freight volume to triple by 2050. Growth of this kind will be supported by programmes such as the UK Government’s Mode Shift Revenue Support scheme, making it easier for supply chain managers to shift to rail.

With a single trainline’s ability to remove thousands of lorries from our roads, not only is it reducing congestion and carbon output, but rail is key to making British supply chains smarter and more resilient.